Own Your Boss with Paid Social Reporting

The challenge, increasingly, with social is achieving reach. As pressure to monetize mounts on the major social platforms as a result of IPOs or venture capital rounds, so too has how their algorithms work.

If you’ve not touched Facebook for a few months you’ll notice a significant change in how many people are actually seeing your content organically.

Reach percentage has been decimated and it has required a lot of content strategy tweaks and testing to get them back to anywhere near where they were pre algorithm change. The Palo Alto business has not hidden the fact that paid is the way to ‘gain’ that reach back and that monetisation is now the name of the game!

Including a paid element within your strategy is therefore imperative in order to achieve the reach. The question is, how do you go about ensuring that the money you spend equates to a positive return as far as your business is concerned?

In reality the same basic rules apply to paid as they do to organic but let’s look at that in a little more detail now.

The first point to make is that measuring social is NOT easy. Given that the majority of metrics, or interactions, may well be happening ‘off site’, often on the platform itself (if you are building an audience as opposed to looking for conversion in the more traditional sense) measuring them in the traditional way will not give you the whole picture.

This means it is absolutely imperative that you make really clear up front what you want to measure, and plan how you will do that before kick off.

Usually your paid campaign will be about achieving one of the following ‘conversions’ (and we are talking about Twitter and Facebook here):

3. A click through to your site followed by a conversion of some kind

The great news is that the first two are very easy to track as part of the internal system reporting across both Facebook and Twitter.

Below you can see how Facebook reports paid spend results and it is very easy to see your cost per ‘conversion’.

If you want to track ‘off site’ conversions there is help here also. A fairly recent addition to the Ads dashboard is a section called ‘conversion tracking.’

You can see a screenshot of how that looks right here: 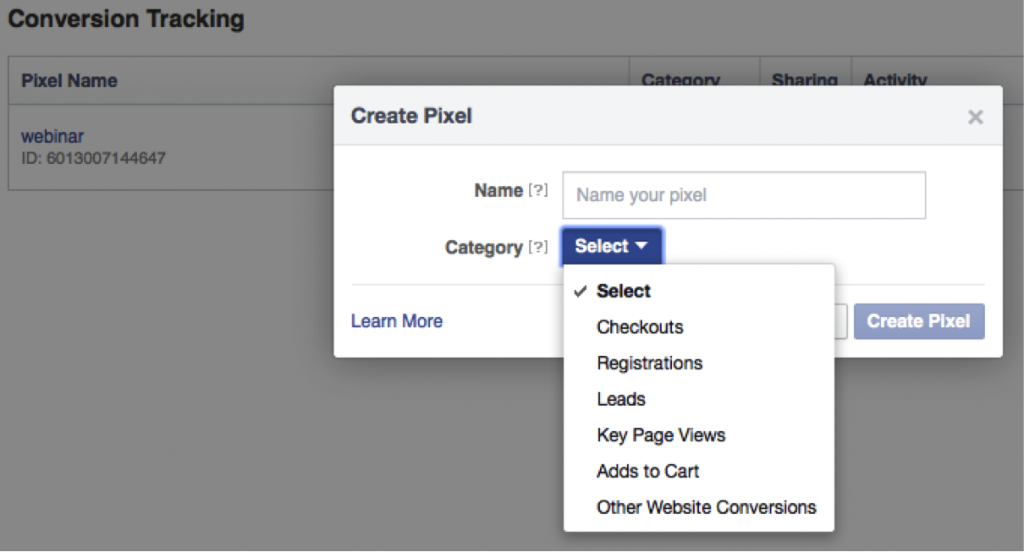 And by simply choosing the conversion relevant to your campaign you are then simply given a short snippet of code to add to the page from which you’ll track the conversion. 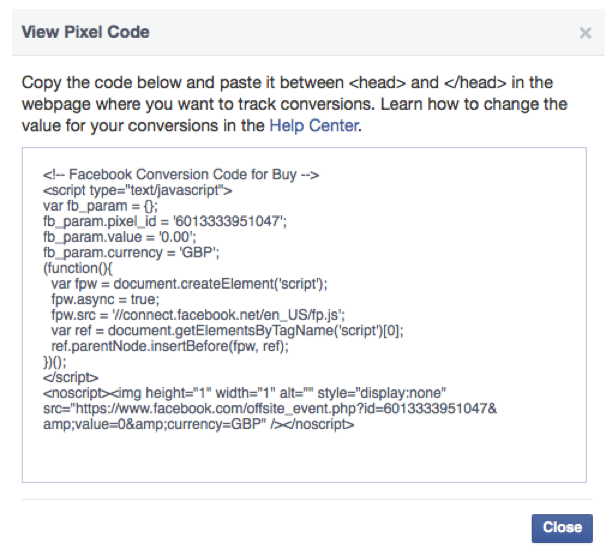 The reporting is simple but helpful and it is possible to set a conversion value also. By editing the following code and adding in the value you wish to assign to the conversion then you will begin seeing that reported in the main dashboard.

Replace the ‘XX’ with the value you wish to use:

If you are using Twitter the story is much the same. The Ads platform allows the user to set up conversion tracking and even edit the period of time you wish the attribution to be handed to the ad campaign.

The ‘Analytics’ section then gives you some excellent insight into the individual tweets, helping you to select the right one based on its impact.

Below you can see how key interactions are recorded with Impressions and key Engagements clearly labelled. With conversion tracking set up this will also be included:

You may well want to track this activity within your existing Analytics, of course. Doing so will give you greater detail around things like assisted conversions and the other value the traffic brings over the longer term.

Whilst marketing automation software suites can make tracking this kind of granular detail much more easier, there is still a lot of information you can gather by setting up Analytics properly.

In short there are dozens of Custom Reports you can create and the subject area is large enough for a post or even eBook all of its own. For the sake of this post we will look at the basics, to ensure you have the ability then to go more ‘customized’ should you wish.

The very best thing you can do before starting any campaign is to become very friendly with Google’s URL builder. The simple tool helps you build trackable URLs, which can then be used for any campaign you are running. Raventools has even made it even easier by creating this version, which breaks down the process into even more simple steps.

A URL tracking service like bit.ly can also prove to be useful as a secondary data source. If you use different links for each social channel, you can also get an idea of which is your best converter.

Getting the whole picture

Knowing how well Paid has performed as a standalone channel is only half the story though, of course. The key is not just to track one element of the project (such as paid) but also to track every other possible traffic course, whether that sits in the Earned, Owned or Paid sector of your strategy.

By doing that you get the full picture and it helps you understand Paid’s place as part of the whole campaign.

With unique URLs for your paid social activity, or even your paid activity per platform (you may want to have one for Twitter and one for Facebook for instance) you can now go ahead and make sure that Analytics is going to give you the data you need.

The first step is to map out the user journey towards any potential conversion on your site. If that action is an enquiry form completion you will want to ensure you have a ‘thank you’ page set up on a separate URL that is delivered upon submission of the form. This then allows you to place tracking snippets on that page.

If the conversion is a purchase then you will want to set up that tracking on the order confirmation page at the end of the funnel.

Reporting the value of the conversion is only half of the story of course when tracking ROI. The other key component is how much you are spending to achieve them. It is entirely possible to do this manually by correlating the data from your Twitter or Facebook dashboards with the conversion reporting there, or in Analytics.

The smart way, however, is to set up something called Cost Data Upload. This gives you the ability to add campaign cost details into your Analytics Dashboard so it looks a little like this:

The implementation is not as easy as it should be in reality but useful tools like this one from Lunametrics make it a lot easier for most.

What if you want to measure the value of a ‘Like’?

As we discussed earlier not all ‘conversions’ are on site however, when it comes to social. What if you want to measure the value of each Like, or Follower to your boss?

It’s a very difficult thing to quantify in real terms as variables such as the ‘Lifetime Value’ of a retained customer will differ wildly from business to business but it is possible to put a number on it.

There will always be some ‘guesstimate’ but the good news is that there is a simple tool to help you try, at least, to quantify this.

The tool we use a lot is the Hubspot Value of a Like. The company’s ‘social scientist’, Dan Zarella,  (a man definitely worth a follow on Twitter) has created a complex formula for measuring exactly that.

To use it simply hop onto the site and follow the simple process.

Seeing it in Analytics

To actually get to this reported data easily within Analytics you can head straight to the social conversions report, found by following Traffic Source > Social > Conversions. This will then report on how many conversions have been achieved as a result of the activity and it is from this that you can start to see the bigger picture.

Within it not only will you be able to see ‘last click’ attribution, or those that converted directly from the campaign, but also ‘Assisted Conversions’. These are the people that may have initially come through to the site via the paid campaign but then dropped off. They may then go back to the site later that day/week/month via another source (such as ‘direct’ and convert. The beauty of having this set up correctly, however is that you can easily still assign the value of that conversion to your paid plan, as it was initially the way they discovered you.

If you work through all of the above you will have lots of really useful, actionable data at your fingertips. It is critical that you don’t overload yourself here as often it is as bad to drown in data as it is to not have any in the first place, but should you wish to dig a little deeper still, below are a couple of other useful links to further reporting options:

1.     It is possible to create a social ROI spread sheet manually, but this one, by Benjamin Mangold, can be a useful addition to your suite of ‘dashboards’. Follow the link here to try out the pre-formatted Google Doc.

2.     There is also a lot more you can do with Analytics, of course, and the opportunity to create different types of Custom Reports is almost endless. For those who like to take the hard grind out of this process Google has created a really useful ‘gallery’ of pre-made dashboards and you can easily bolt them into an existing Analytics account in a few seconds. The key social ones can be found right here.

3.     Enterprise tools can also provide extra insight, specific software suites such as those offered by Marin, Adobe and Wildfire can do the hard work for you.

There are hundreds more of course including this little lot (the majority of the list previously compiled by Creative Traction):

We have covered the basics here but there are, of course, a myriad of other factors to bear in mind and two more are:

Tracking with the use of codes

You don’t have to rely on measurement via Analytics to tell you what your paid campaign has brought you in pounds and pence. One of the most obvious ways to add depth to the data you collate is to extend a special offer through your social channels that can be redeemed with a specific code or phrase.

For example, if you’re a supermarket and want to track traffic generated by a social media promotion on a beer offer during the World Cup, offer a 15% discount for customers who use the promotional code “worldcupwin” on your website, or at your store.  From that data you will be able to see the real impact that your campaign has had on the bottom line.

What’s an ‘average’ customer worth?

The first step in judging paid promotion success is understanding the value of your average customer. For someone who buys your product or service, what is the average order value? What per cent of customers order again in the future?

Let’s say your average customer order is £300 and 20% of customers reorder at the same average order size of £300.  Your average customer would be worth £360 = £360 + (20% X £300). It is certainly worth factoring this into the final analysis as including ‘lifetime’ values will dramatically change the face of your P&L outcome.